Daily serving of this “eggs-cellent” food can protect your heart, study suggests 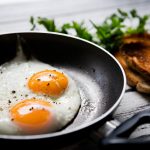 (NaturalHealth365)  Over the past 40 years, the egg has gone from being viewed as a near-perfect food – and a desirable cornerstone of a healthy breakfast – to being scorned as a cholesterol-packed culprit that can raise cholesterol and contribute to heart disease.  Fortunately, the tide of public and scientific opinion – along with the belief that egg consumption should be limited or avoided – is now reversing itself.

A new Chinese study at Peking University shows that eating moderate amounts of eggs offers substantial benefits for heart health.  Meanwhile, there appears to be a reawakening of appreciation for the superb nutritional profile of protein-rich eggs.  Let’s take a closer look at the value of eating eggs.

In a new population-based Chinese study involving over 4,770 participants and published in eLife, researchers used TNMR, or targeted nuclear magnetic resonance, to measure 225 different metabolites in plasma samples from participants’ blood.  The team found that people who ate up to one egg a day enjoyed health benefits, including higher blood levels of apolipoprotein A1.  This protein is an important building block of healthy HDL cholesterol, which helps to protect blood vessels from atherosclerotic blockages.

To conduct their study, the scientists built upon their earlier research, published in 2018 in the journal Heart – and showed a reduced risk of heart disease from eating eggs.  In a review of 17 studies involving 263,938 participants published in the prestigious journal BMJ, the authors concluded that higher consumption of eggs (an increase of one egg per day) was not associated with increased risk of heart disease or stroke.

While eggs are genuinely high in cholesterol, it appears they were getting a “bad rap” when it comes to raising cholesterol levels.  Surprisingly, experts say that for the majority of people, total cholesterol levels remain unaffected by eating eggs.  What eggs do achieve, however, is to help alter the makeup of existing cholesterol.

For example, they help change small, dense particles of LDL cholesterol (which are linked to higher rates of heart disease) to higher-sized LDL, which constitutes an improvement.  (There was one caveat, however.  For diabetic patients, egg consumption was statistically linked to an increased risk of heart disease.  Scientists speculate that people who have diabetes and consume eggs may be generally less health-conscious and noted that on a low-carb diet, which is recommended for people with diabetes, eating eggs led to improvements in markers of heart health).

Eggs are one of the most nutritious foods on earth

When it comes to nutrition, few foods can compete with the egg.  A single boiled egg contains an impressive 6 grams of high-quality protein and 5 grams of healthy fat.  Moreover, the same egg contains significant amounts of vitamin A, D, and B vitamins – including almost 10 percent of the recommended dietary allowance for vitamin B12, which is found in few foods.  In addition, a single egg contains over a fifth of the RDA for selenium, an antioxidant trace mineral believed to be protective against cancer, along with the bone-building minerals calcium and phosphorus and the essential mineral zinc, which is vital for immune function.

Eggs are also high in choline, a nutrient needed for building cell membranes and producing signaling molecules in the brain.  Finally, the yolk of the egg contributes generous amounts of lutein and zeaxanthin, a pair of yellow carotenoids, or plant pigments, that are stored in the retina at the back of the eye.  An important component of the AREDS vitamins for eye health, lutein and zeaxanthin are advised to help protect against macular degeneration and cataracts.

The egg offers this amazing wealth of nutrients at a scant 77 calories – and may even promote weight loss through its high satiety index (a measure of how “filling” foods are).

A festival of healthy choices partners well with eggs

When preparing eggs, there is no shortage of wholesome and delicious foods to pair them with.  Scramble eggs with mushrooms, basil, tomatoes, and feta cheese, or season them with celery seed, garlic, onions, chives, or paprika.  You can stuff eggs with salmon and dill, use them to create a fluffy quiche, or add sliced hard-boiled eggs to healthy spinach or quinoa salads.

Pro tip: Always opt for certified organic (pasture-raised) eggs whenever possible.  Organic eggs have higher levels of anti-inflammatory, cholesterol-lowering omega-3 fatty acids and lower levels of saturated fat than non-organic eggs.  They have also been shown to contain higher levels of vitamins A and E.

While eggs have been unfairly “trashed” for their cholesterol content, their bad press may soon be a thing of the past.  So let’s hear it for glorious – and heart-healthy – eggs.  They can make a sensational addition to your healthy daily diet.

(NaturalHealth365) You’ve probably heard that too much sugar harms your health.  Sugar END_OF_DOCUMENT_TOKEN_TO_BE_REPLACED

(NaturalHealth365)  Menopause is a natural part of getting older, signaling the end END_OF_DOCUMENT_TOKEN_TO_BE_REPLACED

(NaturalHealth365)  More Americans are dieting than ever before.  Almost half of Americans END_OF_DOCUMENT_TOKEN_TO_BE_REPLACED