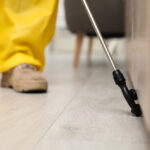 (NaturalHealth365)  In 1962, scientist Rachel Carson published the book “Silent Spring” which turned the environmental movement upside down and was instrumental in pushing the United States to place a ban on DDT.  The U.S. Environmental Protection Agency (EPA) also sprang up in the wake of the groundbreaking publication.

Despite the extraordinary evidence Carson’s book offered concerning the dangers of pesticides and their link to certain cancers and other serious health issues, the EPA has chosen to ignore it all.  To date, the EPA is still approving pesticides strongly linked to breast cancer.  The reason for this is found in a recent peer-reviewed study on the subject.

A recent study published in Molecular and Cellular Endocrinology found that regulators routinely turn a blind eye to pesticides’ risk profiles – including their potential for causing breast cancer – when assessing them for approval.

When a manufacturer seeks EPA approval for a pesticide, it is fairly standard for the company to submit studies addressing chemical’s potential for causing cancer.  However, in the study – which included a review of the EPA’s pesticide registration documents – researchers discovered 28 pesticides linked to mammary tumors, yet, 19 were approved, despite the evidence.  The EPA dismissed the proof.

Only 9 of the pesticides were acknowledged as the cause of mammary tumors.  There was no explanation, no defense of the EPA’s decision, just a stamp of approval on products that have been scientifically proven to have the potential to cause breast cancer.

The researchers called on the EPA to reevaluate the cancer risk assessments of five previously approved pesticides due to concerns of harm:

These pesticides are widely used and have been linked to alarming health risks, including cancer.

Time to hold the EPA’s feet to the fire

The people of the United States deserve better from an agency created to protect them.  It is time to hold the EPA’s feet to the fire and demand better.  This calls for a complete revamp of the approval process and, most importantly, updating the agency’s carcinogenicity and reproductive testing guidelines to more efficiently and effectively capture the effects pesticides have on the mammary gland.

Furthermore, the supporting studies used in the approval process need to be made freely available to the public and other scientists so they can be examined and analyzed by researchers independent of the company that owns the pesticide.  It also means that industry-financed studies have to go.  That way, there is no possibility of bias or skewing the studies only to show the ones that favor the company’s agenda.

It is time for a change.  Enough people have suffered and died because of the EPA’s negligence.