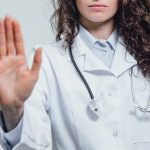 (NaturalHealth365) This fall, the American Medical Association officially denounced discrimination against people based on their vaccination status, stating on their website that “A patient’s vaccination status in and of itself is not sufficient reason, ethically, to turn that individual away.”

Yet, a recent executive order from the state of Colorado initially had some people worried that doctors would be permitted to do exactly this: refuse patients and turn them away from hospitals if they didn’t have a jab.  This isn’t true, thankfully, but the move from the Colorado Governor does raise some other questions about the COVID shot efficacy.

On October 31, 2021, Colorado Governor Jared Polis issued an Executive Order D 2021 135, called “Authorizing the Colorado Department of Public Health and Environment to Order Hospitals and Freestanding Emergency Departments to Transfer or Cease the Admission of Patients to Respond to the Current COVID-19 Disaster Emergency in Colorado.”

Rumors initially spread that the executive order explicitly allowed hospitals and emergency rooms to refuse care to unvaxxed people.  Thankfully, the rumors are false, and the Office of Governor Polis recently released this statement in response to the uproar:

The order “authorizes the Colorado Department of Public Health & Environment (CDPHE) to determine whether a hospital or freestanding emergency department is at, or reasonably anticipated to reach, capacity.  CDPHE is authorized to direct those facilities to transfer patients to prevent overwhelming the capacity of a facility and its staff.  The Executive Order doesn’t even mention or have anything to do with vaccination status.” (emphasis ours)

Governor Polis also adds that under his order, hospitals still must comply with the Emergency Medical Treatment and Labor Act, which includes provisions such as providing medical screening to anyone seeking ER care and ensuring stabilizing treatment within the hospitals’ capacity before transferring patients.

Interestingly, the executive order also authorizes CDPHE to direct the transfer of patients to other hospitals, skilled nursing facilities, “dormitories,” and “alternative care” facilities without a patient’s written or informed consent, assuming CDPHE has determined that “a hospital or freestanding emergency department is at, or reasonably anticipated to reach, capacity.”

Of course, another point should be mentioned here:

According to the Governor, at the time of this executive order, about 80% of eligible Colorado residents were fully vaxxed.  Yet despite this “significant progress,” COVID cases were surging – which greatly calls into question just how effective this shot really is at stopping disease transmission.

The Governor’s office blamed it all on the Delta variant, of course, as well as the “20% of Coloradans who have yet to get the highly effective, safe vaccine.”

Evidence of medical discrimination still abounds in the American public

The executive order is set to expire 30 days after it was first issued unless the Governor extends it.  However, just because this executive order doesn’t explicitly discriminate against unvaxxed people, it doesn’t mean people in other parts of the country aren’t attempting to justify discrimination based on vax status.

To name a few:

As vax mandates continue to take hold in different parts of the country, time will tell if organizations and officials will continue to attempt to blatantly discriminate people based on their private medical decisions – and whether formally “fully jabbed” people who choose not to get a booster shot will join the ranks of discriminated individuals.

(NaturalHealth365)  Since the late 1980s, the number of petitions filed with the END_OF_DOCUMENT_TOKEN_TO_BE_REPLACED