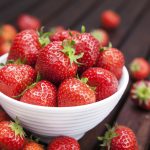 (NaturalHealth365). There is one point on which experts in both alternative and Western medicine wholeheartedly agree: brightly-colored fruits and vegetables – such as purple Concord grapes, brilliant orange pumpkins, and ruby-red raspberries – are rich in antioxidant plant pigments that can help ward off chronic degenerative diseases.  And, research has just revealed yet another benefit of “eating the rainbow.”  Two flavonoids in vibrant red strawberries, fisetin, and quercetin, have been recognized by scientists for their ability to destroy “senile” cells in the body.

Senescent cells are older, damaged cells that have stopped their normal growth cycle and begun to produce inflammatory (and possibly carcinogenic) chemicals.  Researchers have found that aging in tissues is associated with increased cellular senescence – and that multiple chronic diseases, including obesity and chronic kidney disease – are accompanied by an ever-growing accumulation of senescent cells.

While these senescent cells are obviously “bad news,” there is a reason for hope.

Scientists at the Mayo Clinic are currently pioneering the use of senolytics, which are agents that can destroy senescent cells.  While some senolytics – such as the cancer drug dasatinib – must be synthesized in laboratories, the exciting fact is that fisetin and quercetin are natural senolytics found in many fruits and vegetables, including strawberries.

By the way, strawberries are the richest dietary source of fisetin on the planet!

Early animal studies on senolytics have been encouraging.  In a paper published by the esteemed medical journal The Lancet, the authors noted that senolytics could “delay, prevent or alleviate” an impressive menu of age- and senescence-related conditions, including frailty, cataracts, osteoporosis, cardiac dysfunction, pulmonary fibrosis, metabolic syndrome, diabetes, and dementia.

Good news:  Research on senolytics, including fisetin and quercetin, hails them as potentially “transformative”

In a controlled clinical trial published in The Lancet, researchers explored the effects of senolytics on human patients with chronic diseases.  The team reported that a combination of dasatinib and quercetin decreased senescent cells in patients with diabetes and chronic kidney disease – and improved walking endurance and gait speed in patients with pulmonary fibrosis.

The scientists concluded that senolytics could improve physical function and extend health and lifespan – and said they could be “transformative” in treating older adults with multiple chronic degenerative diseases.  It should be emphasized, with the U.S. Centers for Disease Control and Prevention reporting that six out of ten American adults currently have a chronic disease – and four out of ten suffer from multiple chronic conditions – this is truly encouraging news!

Fisetin and quercetin in strawberries combat heart disease and cancer

Fisetin and quercetin both have potent anti-inflammatory and antioxidant effects, allowing them to scavenge harmful free radicals, prevent disease-causing oxidative damage and reduce the inflammation that lies at the root of many chronic diseases.  According to a recent review published in Frontiers in Chemistry, fisetin strongly inhibits the growth of cancer cells.

The team reported that fisetin’s anticancer effects increased when paired with antioxidant vitamin C.  And, conveniently, strawberries are rich in both.

Powerful as they are, fisetin and quercetin are not the only disease-fighting antioxidants strawberries bring to the table.  These sweet, juicy berries are also rich in procyanidins, anthocyanins, and ellagic acid – which has also been shown to stop the growth of cancer cells.

In addition, multiple population studies have demonstrated a link between berry consumption and decreased risk of heart disease-related deaths.  For example, in a controlled trial published in Nutrition Research, supplementation with freeze-dried strawberries lowered LDL cholesterol and improved various risk factors for atherosclerosis in patients with metabolic syndrome.  And, it doesn’t’ hurt that strawberries are rich in folate – which can help prevent strokes – and potassium, which helps to lower blood pressure.

Spectacular strawberries are simple to serve

While strawberries are undeniably full of disease-fighting antioxidants, senolytics, and micronutrients, they are first and foremost a luscious treat that can be prepared and served with a minimum of fuss.

Strawberries can be enjoyed “as is,” or you can balance their sweetness with a splash of balsamic vinegar, a dash of black pepper, a sprinkle of cinnamon, or a scattering of fresh basil or mint.  Try stirring them into Greek yogurt, adding them to salads or blending them into your favorite smoothie.

By the way, the leaves at the top of the berry are edible – as well as nutritious.  Save them to toss into salads or smoothies, or dry them for use in herbal teas.

With a modest 32 calories and a substantial 2 grams of fiber in each 3.5-ounce serving, strawberries are a wholesome, low-calorie food with a relatively low glycemic index.

Of course, for maximum benefit, always opt for organic berries whenever possible.  But, don’t eat strawberries if you are allergic to them.  Experts point out that strawberry allergies are more likely to occur in people with allergies to birch pollen and/or apples.

Bottom line: strawberries have a rich supply of anti-aging compounds and disease-fighting antioxidants – paired with their juiciness, beautiful scarlet coloration, and irresistible taste.  So, no doubt, this fruit makes a spectacular addition to your healthy diet.