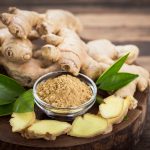 (NaturalHealth365) The “graying of America” has led to soaring rates of Alzheimer’s disease, an age-related neurodegenerative condition that currently affects 6.2 million adults in the United States.  And, there is worse to come.  According to the Alzheimer’s Association, the incidence of Alzheimer’s disease and dementia doubles every 10 years after the age of 60 – leading experts to predict that cases of cognitive decline will skyrocket to 13.8 million by the year 2050.

Conventionally speaking, there is currently no cure for Alzheimer’s disease, characterized by deep deficiencies of memory and impaired cognitive function.  And, while Western medicine attempts to ease symptoms with pharmaceutical medications such as cholinesterase inhibitors, the general ineffectiveness and side effects of these drugs have caused researchers to search for novel, natural therapies with multi-targeted potential.  But, now, an exciting new review indicates that ginger combats Alzheimer’s disease.  Let’s look at how this medicinal food can fight Alzheimer’s disease through multiple action methods.

In a sweeping new review published in January 2021 in Biomedicine and Pharmacotherapy, the authors evaluated cell, animal, and human studies involving ginger and its constituents – such as gingerols, shogaol, and borneol.

While many of ginger’s compounds have protective effects on the brain, the reviewers reported that one in particular – 6-gingerol – seemed to prevent aberrations in amyloid-beta proteins and act against cellular damage.

This is exciting news – as Alzheimer’s disease can occur when abnormal amyloid-beta proteins accumulate into “plaques,” which in turn can cause the death of brain cells (neurons).  Abnormal amyloid-beta proteins are also associated with aberrations (phosphorylations) in another group of brain proteins known as tau.  This can lead to the creation of snarled neurofibrillary filaments known as “tau tangles,” which can increase the risk of Alzheimer’s disease.  (In fact, scientists have noted that there is a strong connection between levels of phosphorylated tau in the cerebrospinal fluid and the decline of cognitive function in Alzheimer’s disease).

Misfolded amyloid-beta proteins can have other negative effects as well.  Chronic exposure induces the release of inflammatory chemicals (interleukins) associated with Alzheimer’s.

Alzheimer’s disease and other forms of dementia may also be triggered by oxidative stress, inflammation, and reductions in important antioxidants such as superoxide dismutase and glutathione.

In addition, the researchers noted that ginger constituents increase levels of superoxide dismutase and glutathione – the body’s most important antioxidant enzymes – in the liver.

“Studies have shown that existing phenolic compounds … including gingerols and shogaols have a neuroprotective effect in conditions affecting memory and the aging process,” the authors stated.

In an earlier study published in Pharmacology and Therapeutics in 2018, the researchers came to the same conclusion, reporting that ginger and its constituents improved “cognitive function by regulating amyloid-beta plaque-induced neuronal cell death and memory impairments.”

In both reviews, the researchers concluded by endorsing ginger as a “safe nutraceutical” that can be used to combat neurodegenerative disease.

In 2011, researchers in Thailand examined the benefits of ginger on cognitive function in healthy middle-aged women.  Sixty female participants, with an average age of 53, were randomly assigned to receive either a placebo or a standardized ginger extract – at either 400 mg or 800 mg a day – for two months.

The team found that the ginger-treated groups enjoyed significant enhancements in working memory.  The daily 800-mg amount appeared to be most effective, with researchers noting that it improved the power of attention and the speed and quality of memory.  They credited 6-gingerol with the therapeutic effects, noting that it increased levels of acetylcholine, a neurotransmitter essential for learning and memory.  They also suggested that the strong antioxidant effects of gingerols and shogaols played a role.

Adding that no serious adverse effects were reported, the scientists credited ginger as a potential brain tonic to enhance cognitive functioning for middle-aged women.

Significantly, ginger seemed to play a role in helping to ward off mild cognitive decline, which can be a precursor to Alzheimer’s disease.

Botanically known as Zingiber officinale, ginger has a long and venerable history as a medicinal herb.  Since antiquity, ginger root has been used in Ayurveda for infantile colic, bronchitis, indigestion, and respiratory diseases.  It has been utilized in China to support heart health, treat sore throats, vanquish infectious diseases, eliminate parasites and even ward off stroke.  Perhaps most significantly, ginger has a long history of use in traditional Persian medicine to treat memory impairments and dementia.

Modern-day studies have shown that ginger not only protects the neurological system but the intestinal tract and liver as well.  In addition, it helps to modulate the immune system – making it a potential intervention for autoimmune diseases – helps lower blood sugar and is antioxidative, anti-inflammatory, analgesic and anticancer.  In addition to its other uses, ginger is commonly advised to ease nausea, indigestion, and motion sickness.

You can add grated fresh ginger root to soups, vegetables, and salads, or juice it and use it to add a little “zing” to a smoothie.  You can also steep slices of the fresh root for a flavorful tea.

Supplementary ginger extract is available in capsules, with natural healers typically recommending amounts ranging from 400 mg to 2,000 mg a day.  However, consult your integrative physician before using supplementary ginger.

Alzheimer’s disease, a devastating condition that robs elderly adults of their precious memories and cognition, is currently the sixth leading cause of death in the United States.  The brand-new research, showing that ginger combats Alzheimer’s, couldn’t come at a better time.  Let’s hope that the good news about its amazing potential to prevent and treat dementia is not overlooked by Western medicine.