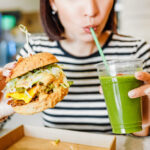 (NaturalHealth365)  Most people who consume fast food are aware that it isn’t good for them.  Fast food is notoriously high in fat, sodium, processed carbohydrates, and calories. However, what consumers might not be aware of is that these foods are also high in harmful chemicals called phthalates.

A study from the George Washington University Milken Institute School of Public Health has found that those who eat fast food are exposed to harmful chemicals in addition to the other known health hazards of these foods.  The study appeared in the journal Environmental Health Perspectives.  Researchers found that people who ate large amounts of fast food had the highest levels of phthalates in their systems, as much as 40 percent higher than those who did not eat fast food.

Phthalates belong to a class of chemicals used in food packaging as well as fast food production.  These toxic substances have been linked with many serious health issues in both adults and children – including prostate cancer, breast cancer, and damage to the reproductive system.  Studies have shown that these harmful chemicals are prone to leaching out of plastic food packaging and contaminating the food within it, making processed foods even worse.

The individuals studied provided detailed information about what they had eaten within the last 24 hours.  They also provided a urinary sample to be tested for two specific phthalates: DiNP and DEHP.

Meat and grain items contributed the most significantly to phthalate levels.  Grain items include bread, pizza, cake, rice dishes, burritos, and noodle dishes.  Other studies corroborate the consumption of processed grains, in particular, as a major source of harmful exposure to chemicals leached into the food.

The researchers discovered what we all know – on a common sense level.  The more we eat fast food, the more toxic we become.  In fact, levels of DEHP were nearly 24 percent higher, and DiNP levels were up to 40 percent higher in fast food eaters.

In addition to food packaging materials, phthalates have been found in a disturbingly wide variety of products, including some perfumes and even children’s toys.  In 2008, the use of phthalates in toy production was banned.

Bisphenol A is another major health concern

Bisphenol A, or BPA, another common food packaging material, was also found in study participants.  This chemical is linked with numerous health problems and behavioral issues, especially in young children.  While there was no association between the amount of fast food eaten and BPA, persons who consumed fast food meat products tended to have higher levels of bisphenol A than those who reported not eating fast food.

This information should be a cause for major concern in regard to the continued use of phthalates in food processing.  Clearly, these chemicals are leaching out of packaging components and into the foods that many people eat.  And, without a doubt, fast food is one of the worst food choices.

Consumers now have more reasons than ever to avoid fast food and other processed choices.  To minimize phthalate and bisphenol A exposure and maximize health, favor natural, organic food choices with as little processing as possible.

(NaturalHealth365)  Research over the past decade has shown, without a doubt, that END_OF_DOCUMENT_TOKEN_TO_BE_REPLACED