(NaturalHealth365)  The proof is here: vaccines are contaminated with glyphosate.  Scientists Anthony Samsel and Stephanie Seneff, who recently published their fifth peer-reviewed paper on the herbicide glyphosate’s contributions to various diseases, are on the verge of publishing a sixth – which promises to be even more explosive than their prior works.

Backed by strong supporting data from multiple labs, Samsel and Seneff say that many popular vaccines are contaminated with glyphosate used in the weed-killer Roundup, and could initiate a disastrous “cascade of disease” when injected.  The World Health Organization admits that glyphosate is ‘probably carcinogenic in humans’ and many scientists (and holistic health experts) say that glyphosate is already linked with diseases such as autism, inflammatory bowel disease and non-Hodgkin’s lymphoma – to name only a few.

Why are vaccines loaded with glyphosate?

Vaccine manufacturers use animal byproducts – such as egg protein, casein or gelatin – as a substrate to grow the vaccine, and in some cases these animal products are used as a stabilizer in the actual vaccine.  If the animals are sourced from factory farms, the odds are good that they have been consuming feed that not only contains GMOs but has been sprayed with glyphosate – resulting in injections of the toxin directly into people’s bodies, or into the bodies of animals they will consume.

In addition, Samsel points out that gelatin is already an ingredient in many popular consumer products, including vitamins, protein powders, beer, wine and other items.  In addition, Samsel notes that he thought his chances of finding glyphosate in some vaccines were “pretty good,” but even he seems shocked at the extent of the contamination.

All the popular vaccines and all the major players are involved

Samsel reports that to guarantee accuracy, he used multiple samples of the same vaccines, multiple varieties of vaccines, and multiple laboratories. Vaccines tested include those for shingles, measles/mumps/rubella, diptheria/tetanus/pertussis, chicken pox, influenza, pneumonia and hepatitis B.

What he found was frightening: Zostavax, a shingles vaccine made by Merck, contains .42 ppb (parts per billion) of glyphosate, while MMR-II, for measles, mumps and rubella, clocks in at 2.90 ppb. A different sample of MMR-II was found to contain a whopping 3.740 ppb.

Not just Merck, but other pharmaceutical giants have contaminated vaccines as well.  The Novartis flu vaccine Fluviran contained from 1.70 to. 227 ppb, depending on the lab.  Sanofi Pasteur’s DPT vaccine contained 1.09 ppb glyphosate, while Glaxo Smith Kline’s Hepatitis B vaccine scored between .33 and .337 at two different labs.

Only one vaccine, Merck’s Pneumovax 23, appeared to be free of glyphosate. But, because the labs had a cutoff of .15-.75 ppb, this absence of glyphosate should not be particularly comforting – and maybe not reflective of reality.

Remember, 3 parts per billion may not seem like a high concentration. But Samsel points out that there are trillions of molecules involved, amplifying the amounts.

You can watch the video of Samsel reporting his findings here:

For added documentation: Check out the images (below), which illustrate the three different lab results. 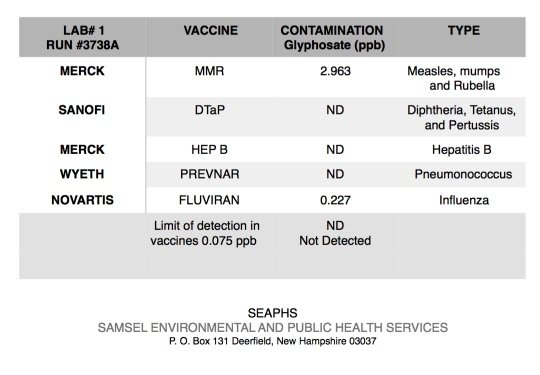 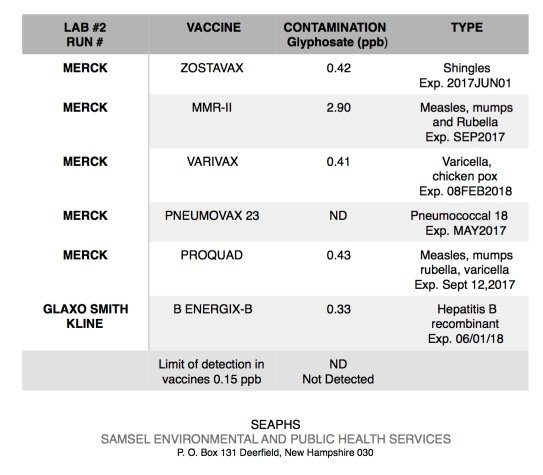 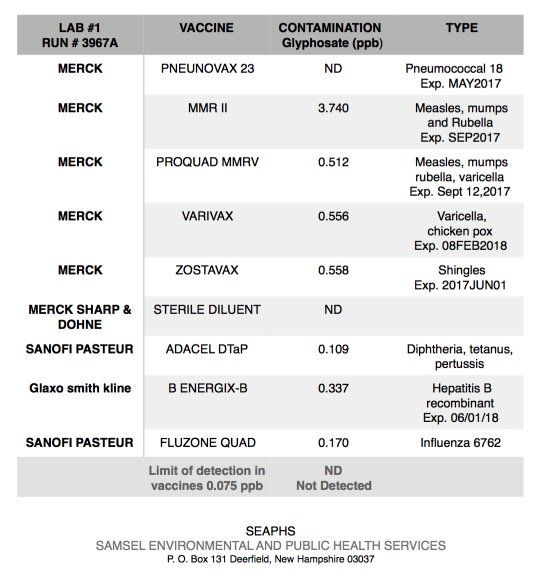 So, here’s a simple question: Does it make any sense to be injecting people with a probable carcinogenic and toxic herbicide – under the guise of keeping them healthy? (Politicians, are you listening?!)

Advocates are calling for a grassroots movement demanding postponement of all mass vaccinations until vaccine manufacturers agree to use animals that have consumed only organic feed, and been tested to make sure they are glyphosate free.

Dr. David Brownstein, an internationally-recognized family physician and holistic health expert, points out that known neurotoxins – such as mercury and aluminum; and known carcinogens – such as formaldehyde have no place in vaccines; the addition of glyphosate worsens the situation further.

Dr. Brownstein is calling for a Congressional investigation into vaccines.

So far, no response from health or government agencies

Samsel has contacted his United States Senator in New Hampshire, along with the CDC, FDA and WHO. He also sent a letter to Congress, which he says has been so far ignored.

Yes, send an important message about contaminated vaccines that are given daily to children and adults, and you hear….crickets! 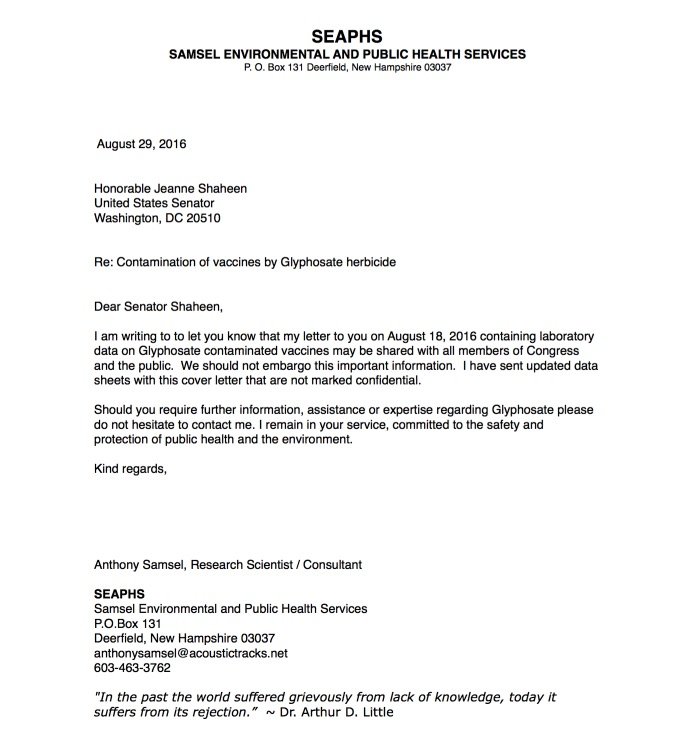 Share this letter with family and friends, or anyone you think doesn’t want glyphosate as a vaccine ingredient.  Even better, write to your local representatives and national medical agencies, and ask that they investigate this new finding concerning glyphosate contamination of popular vaccines.

We’ve got to put an end to this insanity and, together, we will succeed!

(NaturalHealth365)  In certain parts of the country – namely, states with no END_OF_DOCUMENT_TOKEN_TO_BE_REPLACED