NEW strain of deadly bird flu kills 38 percent of those infected and could spark a global pandemic, experts fear 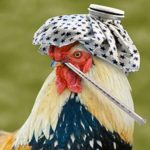 (NaturalHealth365) Researchers are warning that a new strain of bird flu discovered in China could cause a pandemic (a worldwide outbreak of a new disease to which most people lack immunity). According to Professor Jonathan Van-Tam, deputy chief medical officer for England, the virus – which has already claimed 600 lives – should be a “cause for concern for all people” due to its high mortality rate.

In fact, experts say that the new virus could prove to be as deadly as the Spanish flu, which killed up to 100 million people in 1918. But, as always, there is another side to this story. (as you’ll soon see)

While not yet contagious in people, the new bird flu has shown its ability to move from poultry to humans – and researchers say it is only three mutations away from human-to-human transmission.

Clearly, the discovery of this lethal new virus underscores the importance of maintaining a healthy immune system. (and, that’s exactly what the mainstream media will NEVER tell you.)

“The Story:” Over 1,600 people infected in China with deadly bird flu

The virus, named H7N9, is currently circulating in poultry in China. To date, 1,625 people have been infected, and 623 have died from the disease. (Close and prolonged contact with an infected bird is required for the disease to spread to humans, and most of the infected people had some contact with the poultry market).

Symptoms of H7N9 include high fever, cough and shortness of breath. In its severe form, the infection can develop into acute respiratory distress syndrome, which progresses to septic shock, organ failure and death.

According to the World Health Organization, older people, pregnant women and those with existing health problems are most susceptible to severe forms of H7N9.

H7N9 was first diagnosed in humans in 2013, although it is difficult to assess exactly when it “crossed over” from poultry. H7N9 is closely related to H5N1, a Type A influenza which crossed over into humans in 2003.

Although H5N1 did not cause a pandemic, scientists are concerned that H7N9 might. An article in the Telegraph quotes John Oxford, a professor of virology at Queen Mary University, as saying that H7N9 is “younger and stronger and is now waiting for its opportunity.”

The British government is currently studying the virus in an attempt to stop it from becoming a global threat, and the National Health Service of Scotland has released guidelines to help protect against the disease. (Warning: never rely solely on the government for health advice.)

The NHS recommends avoiding visiting live animal markets and poultry farms, and avoiding touching birds, dead or alive – as well as avoiding contact with surfaces that are contaminated with bird droppings.

The agency also cautions against consuming or handling undercooked or raw poultry or eggs, and advises practicing good hygiene – with frequent, thorough handwashing. And, just for the record, all of this ‘conventional’ advice does make lots of sense. (but, as we said before, there’s more to this story.)

As international concern over the disease grows, Western medicine claims that the only solution is to offer an untested, fast-tracked vaccine – one that may not have been sufficiently studied. (Gee, no surprise here.)

But, in reality, maintaining a healthy immune system is really the the best line of defense against any bacterial or viral infection.

Vitamin C has powerful anti-inflammatory, antioxidant and immune system-boosting properties, and proponents credit ‘megadoses’ with treating a variety of diseases, including viral and bacterial infections.

This is a key point: When taken in sufficient amounts, vitamin C stimulates the activity of virus-fighting natural antibodies and promotes the production of interferon – which prevents cells from being infected in the first place.

The healing powers of high-dose vitamin C were clearly illustrated by the case of Allen Smith, a New Zealand dairy farmer who recovered from a near-fatal case of swine flu. His story is told in this video – below:

As documented on the New Zealand version of “60 Minutes,” Mr. Smith had developed white-out pneumonia and hairy cell leukemia, and been placed in a medically-induced coma. Doctors were on the verge of taking him off life support when a family member convinced them to try high-dose vitamin C, after which he made a full recovery.

(Of course, even the doctors who witnessed the astonishing event don’t credit vitamin C for Smith’s recovery – an unfortunate, but common, reaction from the conventionally-trained medical community).

Additional natural remedies for the flu are non-toxic and effective

Olive leaf extract – another potent ally against influenza – contains oleuropein, which disrupts the replication of viruses and promotes phagocytosis, the process by which immune cells surround, engulf and destroy pathogens.

Elderberry extract has antioxidant properties to target the free radicals that impair immune system function, and has been shown to inactivate viruses.

And, breathing the fumes of eucalyptus oil helps prevent infections in the nasal passages, sinuses and lungs. (Good news: eucalyptus oil has been found to be particularly effective against type A influenza).

Natural health experts advise putting 8 to 10 drops on a handkerchief and holding it near your nose to inhale at will. You can also add 10 to 15 drops to a vaporizer for a steam treatment.

Since 80 percent of the immune system is located in the digestive tract, it makes good sense to boost the health of the gut microbiome with probiotics, in supplement form or foods like, miso soup and sauerkraut.

Eating healthy amounts of oranges, grapefruits and bell peppers can help provide essential vitamin C, while cruciferous vegetables – like Brussels sprouts and cauliflower – can ramp up the body’s stores of glutathione, an important disease-fighting antioxidant.

In addition, we encourage you to listen to a special edition of the NaturalHealth365 Podcast, hosted by Jonathan Landsman – as he talks to Dr. Edward Group about the best ways to naturally beat the flu.

You can also get INSTANT access to the Immune Defense Summit, hosted by Jonathan Landsman to learn about the best strategies to boost immune strength. Click here to learn more.

Bottom line: Immune strength is the key to living a long and healthy life. Don’t be dragged down to ‘dark places’ filled with fear about the next epidemic. Take action to today to protect your health and reap the rewards of a healthy life.

(NaturalHealth365) Are you feeling “frazzled?”  For many people, the seemingly endless stream END_OF_DOCUMENT_TOKEN_TO_BE_REPLACED

(NaturalHealth365) What exactly are these natural killer cells (NK cells)?  The name END_OF_DOCUMENT_TOKEN_TO_BE_REPLACED

(NaturalHealth365) Vision loss becomes a serious concern as you grow older, and END_OF_DOCUMENT_TOKEN_TO_BE_REPLACED