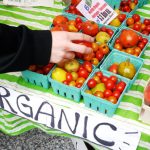 (NaturalHealth365) New research out of France has found that eating organic foods – free of toxic chemicals like glyphosate – is a key lifestyle choice that can help with avoiding a cancer diagnosis.

While there may be a (slim) genetic component to cancer, lowering cancer risk is largely accomplished by making good lifestyle choices.  On top of diet: not smoking, avoiding severe sunburns, regular exercise, nutritional supplementation (when needed) and a positive outlook on life are instrumental to avoiding premature death from chronic disease.

But, the research we’ll feature (today) really highlights the value of organic food.

The research involved 70,000 French adults tracked in a large, ongoing nutrition and health study that began in 2009. The participants were an average age of 44 and were tracked for around 4.5 years each.

A team from Inserm, the French equivalent of the U.S. National Institutes of Health, assessed diet and lifestyle habits of the group throughout the study period.  It was determined that those who consumed organic foods most often were the least likely to develop cancer.

This was in comparison with those who favored produce exposed to herbicides containing the active ingredient glyphosate.

While the researchers admit additional research will be required to gather more specific information about why this is the case, these results confirm the protective effects of organic food versus GMO fruits and vegetables exposed to pesticides and other chemicals.

The study results were published in JAMA, the journal of Internal Medicine.

The researchers strongly believe that the presence or absence of chemicals is the main factor in the protective, health-enhancing effects of organic fruits and vegetables.  Glyphosate as well as diazinon and malathion have been linked with higher rates of cancer, according to the International Agency for Research on Cancer.

However, glyphosate, found in the Monsanto weed killer Roundup, is by far the most widely used.

Organic products offer an effective way to minimize your exposure to unwanted poisons.  A staggering 9 out of 10 Americans have measurable pesticide amounts in their blood or urine. These levels tend to fall dramatically when switching from conventional produce to organic.

The most common cancer types found in the study group (comprised of mostly women) was breast cancer, followed by prostate cancer, skin cancer, colorectal cancer, non-Hodgkin’s and other lymphomas.

It should be noted that people most likely to favor organic food have more discretionary income; better education levels; avoid smoking and exercise more.  However, even taking all these plus other demographics into account, those who ate organic instead of traditional produce showed a 25 percent lower chance of developing any cancer type.

So, if you needed more motivation to eat organic, you just got it.  Take action today and stay well.

Truth be told: How a low-carb diet prevented polio

(NaturalHealth365) Although COVID-19 may feel uniquely terrifying, the truth is: the novel END_OF_DOCUMENT_TOKEN_TO_BE_REPLACED

Defeat dementia naturally with some of the best nutrition on Earth, research confirms

(NaturalHealth365) Why drink immune-boosting herbal tea during a pandemic? Well, not only END_OF_DOCUMENT_TOKEN_TO_BE_REPLACED

(NaturalHealth365) It’s like a scene out of Upton Sinclair’s The Jungle.  Meatpacking END_OF_DOCUMENT_TOKEN_TO_BE_REPLACED