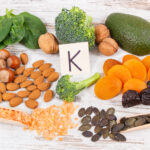 Researchers have shown the distinct ways that vitamin K2 stops the proliferation of cancer cells.  These studies confirm diet and supplementation are the healthiest ways to curtail malignancies.

Vitamin K is a group name for a number of related compounds.  Each one serves an essential purpose in the prevention of cancer.  Vitamin K1 and K2 are the two natural forms of the vitamin – which can target cancer at multiple stages of development.

The anti-tumor action of vitamin K has been under investigation since 1947.  But, only recently has it been discovered that different forms of vitamin K can actually stop the creation of cancer cells.  Vitamin K affects the tumors by modifying growth factors and receptor molecules – which make cells less able to stimulate tumor growth and progression.

The cell cycle becomes frozen and cannot create any further cells.  It also creates programmed cell death through distinctive mechanisms.  One of the most unique methods is called “oncosis” – which is a form of stress-activated ischemic cell demise – and tumor cells are particularly vulnerable to this process.

Tumors can rapidly outgrow their blood supplies, and due to their high metabolism, they also use up oxygen rapidly.  The latter makes them especially vulnerable to oxidant stress – much more so than the healthier tissues around them.  Vitamin K targets tumor cells for destruction by stimulating oxidative stress – without toxicity to healthy tissues.

Persistent stress often leads to chronic cell injury and, eventually, the cell’s demise via oncosis.  This is another way to get rid of cancer cells besides getting them to commit suicide, which is known as apoptosis.

Another unique mechanism of vitamin K, demonstrated recently in bile duct cancers and leukemia, is autophagy, in which cancer cells essentially eat themselves by releasing their own digestive enzymes internally.  By still another mechanism, vitamin C and K in combination contribute to cancer cell death by autoschizis, whereby cells simply split open, spilling their contents.

Plus, in case you’re wondering about the science, a study from Uruguay demonstrated that serum markers in a group of prostate cancer patients indicated tumor cell destruction following supplementation with vitamins C and K.  Another study, the “European Prospective Investigation into Cancer and Nutrition” involved over 24,000 participants from ages 35 to 64, all who were free of cancer when enrolled in the study.

What was found was that vitamin K2 was associated with a lower risk of getting cancer and succumbing to it.  The benefit of vitamin K2 intake was revealed with a dramatic reduction in lung and prostate cancer among the individuals in the study.

At the Mayo Clinic in Minnesota, researchers have found that people with higher intakes of vitamin K have a lower risk of developing non-Hodgkin lymphoma.  In this study, vitamin K1 (found mostly in leafy greens) showed a preventative value in reducing cancer risk.

Those who had the highest levels of vitamin K1 from diet and/or supplements had a 45% less risk for developing this form of lymphoma.  In addition, researchers in Japan discovered that vitamin K2 may play a role in preventing the type of liver cancer caused by viral cirrhosis.

Where can I get vitamin K?

Obviously, you won’t hear much from your conventionally-trained doctor about how to prevent cancer – nutritionally.  But, the fact remains most people do not get sufficient vitamin K from their diet.  Yet, it’s one of the most important nutrients to consume for optimal health.

Hopefully, after reading this article, you have the motivation to eat more (organic) green leafy vegetables like kale and collard greens – along with cruciferous vegetables – as an effective way to prevent cancer.  Remember, we are what we eat.  Eat to live and enjoy your life.

(NaturalHealth365)  If you need yet another reason to eat your veggies, here’s END_OF_DOCUMENT_TOKEN_TO_BE_REPLACED

(NaturalHealth365)  Research over the past decade has shown, without a doubt, that END_OF_DOCUMENT_TOKEN_TO_BE_REPLACED