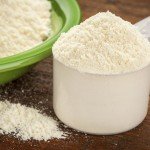 (NaturalHealth365) Type 2 diabetes is on the rise worldwide and has surged in the United States, with an estimated 9.3 percent of the nation’s population suffering from the disease. While blood glucose can be controlled through a healthy diet, exercise and weight management, many of those suffering from diabetes will instead turn to pharmaceuticals rather than make the necessary lifestyle changes.

But recent findings from an Israeli study show yet another way of helping to manage type 2 diabetes through dietary changes rather than with the use of risky drugs.  By starting the day off with a healthy breakfast that includes whey protein, adults with type 2 diabetes were able to lose weight and stabilize blood sugar safely and effectively.

A 23-month study out of Tel Aviv University involved 48 overweight and obese adults with type 2 diabetes. Each study subject ate the same number of calories over breakfast, lunch and dinner.

Researchers found that patients in the whey protein breakfast group had greater weight loss at 12 weeks into the study than those in either the other protein group or the carbohydrate group. Those consuming whey protein also reported feeling satisfied and less hungry. The research results were published in the Journal of Nutritional Biochemistry.

Whey protein works by releasing peptides and amino acids into the digestive tract. These cause the production of several hormones in the gut that have an impact on insulin secretion a well as the body’s food intake regulation. The peptides from whey protein may inhibit production of a protein in the digestive tract that is known to degrade incretin, which is crucial for insulin production.

Whey protein has also been linked to reduction of inflammation, a factor in a number of chronic diseases. A large review study conducted by researchers in China and published in the journal Nutrients found that high doses of whey protein supplements significantly reduced one of the key markers of inflammation in the body.

A number of studies in both humans and rodents have linked whey proteins to a reduction in oxidative stress and increased levels of glutathione, a powerful antioxidant produced by the body. There is also preliminary evidence that whey protein may be beneficial in the control of inflammatory bowel disease.

While whey protein is often thought of in terms of cow’s milk, there are benefits to using whey protein sourced from goat’s milk instead. Goat’s milk is known to be more easily digested and is better tolerated by those with allergies. If you have a lactose intolerance, you are also likely to find you have fewer problems digesting goat’s milk.

The smaller fat globules found in goat whey is also more easily digested and goat products are naturally low in cholesterol, while being loaded with vitamins and minerals.

(NaturalHealth365)  Research over the past decade has shown, without a doubt, that END_OF_DOCUMENT_TOKEN_TO_BE_REPLACED